Let me start by saying that I’m not Catholic, I’m actually a very happy member of our local UCC church. That being said, I’m very impressed with the actions and words we have seen from Pope Francis. He really is a great teacher and leader showing us the ways that we are all supposed to reach out and support all of our neighbors. So, I was thinking that it would be nice to send him a card to let him know that I appreciate him and his message. This card may be a bit feminine with the flowers, but they are just popping up now and they are a sign of rejuvenation and rebirth.

Happily all of the products that I used on this card are carrying forward in some fashion. I used the Falling Flowers bundle for the die cut flower images – the bundle is on the retiring list, but the constituent parts are in the new catalog. Also, I used some of the basic pearls in the center of the small flowers. Those are retired (in fact, they are gone), but new ones in different sizes will be available in the new catalog. I am pleased with how this card turned out – I originally designed it for a stamp club, but I ended up deciding that it was too fiddly and designed something different. 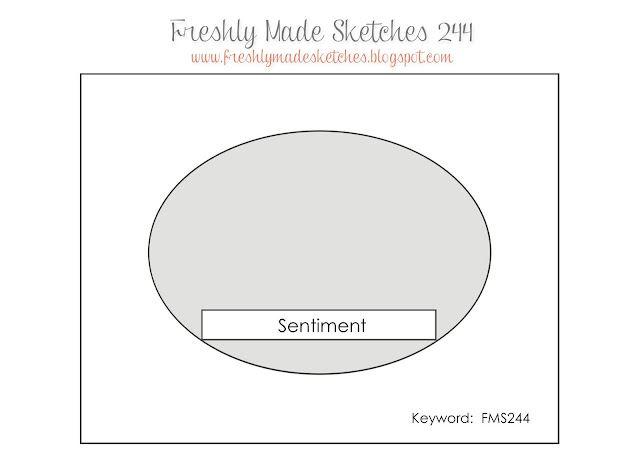 I used this sketch as a starting point for this card. I don’t have a separate piece with the sentiment, rather I stamped it directly on the layer with the oval. To create the oval image I diecut an oval in copy paper and termporarily placed it on the Sahara Sand layer before stamping with the Diagonal Stripe background stamp. This was actually the fiddly bit – I really had to press down pretty hard all over on the stamp in order to get a crisp-ish edge on the oval when I removed the mask.

As an independent Stampin' Up! demonstrator, all of the content on this blog is my sole responsibility and the use of and content of the classes, services, or products offered is not endorsed by Stampin' Up!
The contents of my blog are my own and ©Andrea Sharp and as such may not be copied, sold, changed or used as your own for contests, profits or otherwise without my permission and is here solely for the purpose of inspiration, viewing pleasure and enjoyment. Thank you for understanding.